ANIMATION AS A TOOL OF RESISTANCE

Diogo Da Fonseca
Diogo da Fonseca born in Rio de Janeiro, Brazil. BA in Product Design at Pontifical Catholic University, Rio de Janeiro, 2008. Has been working as a 3D generalist for the past 12 years, created two interactive 3D short animated movies for the permanent exhibition Feathers to the Stars, at the Frost Science Museum in Miami, in partnership with SuperUber Studio in 2016. A political activist, Diogo uses cinema as a tool to communicate his criticisms of the social order. Founder of MIC-Independent Mídia, and co-director of the documentary “Professores à Palmatória”, wich was screened in “Cinema against the State”,on the panel “The Enemy and the Camera” at Forumdoc.bh.2013. Currently attending the second year of the Master in Animation Arts, at Lusófona University in Lisbon, his first student short animated movie “From this side”, about the changes the city of Lisbon underwent as a consequence of tourism, was selected to be screened at Porto Post Doc 2018.

This paper proposes a practice-based approach towards an animation short film production, developed in the context of my Animation Master degree: My main area of study is the influence of African slavery in the formation of Brazilian society. The film develops from two distinct temporal lines that intersect and mix, with the intention to demonstrate how past problems have not been corrected and persist to this day, constituting a critical approach to the heavy conservative, slave-based and colonial traditions that are still deeply rooted and informing the relationships of Brazilian citizens. In this film, animation is used as a resource to unravel and deconstruct themes in a subjective context of racism. On the other hand, the animation provides a ludic way to approach the rich universe of symbolic-mythical Afro-Brazilian cultural traditions constructed by the original slaves, a culture marginalized and persecuted for centuries, therefore highlighting its resistance role and contributing to its reappreciation. 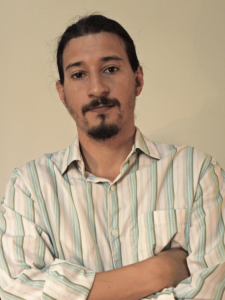