Sandro Del Rosario
Sandro Del Rosario’s films and installations are inspired by places, feelings, and their memories, distilled through a labor-intensive animation process that transforms still images, photos, paintings, and collages in moving, imaginary spaces. Born in Italy, Del Rosario came to the U.S. with a Fulbright Scholarship, and received an MFA in Experimental Animation from the California Institute of the Arts. His work has been awarded and exhibited in many festivals and venues worldwide, including at the Annecy Film Festival, the Berlinale Talent Campus, the MoMa, the Lincoln Center, and the Hong Kong Film Festival. Over the past ten years Del Rosario has been a fellow in residence with his work at the Bogliasco Foundation, the MacDowell Colony, Yaddo, and the Santa Fe Art Institute among the others. Based in Los Angeles, California, he also traveled extensively as a Visiting Artist and Visiting Assistant Professor at non-profit foundations, colleges, and universities across the USA.

This paper will examine the production of independent experimental animator Sandro Del Rosario, situated at the crossroad of visual arts and experimental film. His production follows a practice-based Animation research trajectory, as an attempt to connect medium and significance, purpose and process in experimental animation.
His animated films Train,L.City, and in particular his last animated film Lo Sguardo Italiano (The Italian Gaze)will be reviewed as they touch the main theme of the conference on these topics:
– The impact of geography and/or cultural identity on animation production
Lo Sguardo Italiano was born precisely from the urge to express and translate in artistic terms the geographical and cultural identity of its author, an awareness that is central to this film as much as they are the contradictory feelings about his native Italian land.
– Spatial constructions: Animation, Architecture and Place
Del Rosario’s body of work is an exercise in spatial construction, where the architecture of any place is altered and transformed through a multi-layered, multi-media animation process. The end result is a place only apparently close to the original. Del Rosario’s animations are a blend of quasi-realism, idealized fantasy, and intimate nostalgia.
– Sonic Landscapes – sound and composition in animation
Working on his own as well as with composers and sound designers, Del Rosario adds layered evocative soundscapes to the personal vision of his animated landscapes. 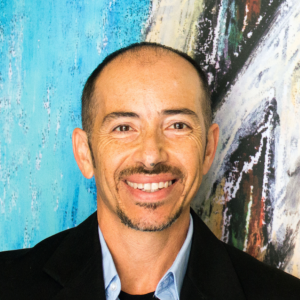