Pearce Sally
Sally Pearce is currently in the first year of a PhD by Practice at Wolverhampton University, where she is based in the animation department. She has a BA in Philosophy from Cambridge University, and a second BA in Fine Art from Sheffield Hallam University. She took her MA in Animation Direction at the National Film and TV School, UK, graduating in 2008. Her animated and mixed media films have screened in Festivals around the world and won many awards.

Locations used by female animated auto-ethnographers are physically, culturally, historically and politically specific – they are gendered, situated – expressing perceived differences, playfully re-writing history. Any life is inscribed by, and into, the places and times it animates. The animated auto-biographer adds further inscription to her life in her choices – which locations matter, how they are stylised and their ontology – are they remembered, representative, symbolic, imagined, introspective, performative? In all of these categories claustrophobic spaces occur, subversively mapping feminist intersectionality through the confined spaces of women’s lives and animation.

e.g. in ‘Places Other People Have Lived’, Yilmaz interrogates her relationship with her sister, embedded in the remembered walls of their family home. An interview with her adult sister is projected onto the animated walls of the house – a ghost from the future, fracturing the family. Mantells’s ‘Gifted’ about dyslexia uses a non-place, representing school and home – blue, featureless and unchanging, where a book looms so large it becomes a place. In Mukii’s ‘Yellow Fever’ the claustrophobic is created not only by a symbolic cramped hairdresser’s salon, but also by posters of women with straight hair and light skin, enclosing the animated characters, who with their dark skins, wince and endure as their hair is disciplined. In ‘1977’ Varela becomes a 2D fill by numbers sketch as her gender draws itself. 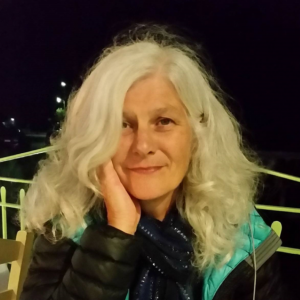