THE TRANSFORMATION OF SPACE IN THE SECOND COMING

Thomas Walsh
Thomas Walsh graduated from the European School of Classical Animation at Ballyfermot Senior College, Dublin in 1994. He worked professionally as a key assistant special effects animator for the Walt Disney Feature Animation Studio, contributing to feature films The Hunchback of Notre Dame (1996), Hercules (1997) and Tarzan (1999). He graduated with a BA (Hons) degree in Cultural Studies from the Norwich School of Art and Design in 2002, and with a PhD from Loughborough University School of Art and Design in 2009. He has published articles on animation practice and aspects of Irish animation history in The Fundamentals of Animation (AVA Publishing, 2006), Place and Memory in the New Ireland (Wissenschaftlicher Verlag Trier, 2009), Contemporary Irish Film (Wilhelm Braumuller, 2011) and Animation: An Interdisciplinary Journal (Sage Publications, 2012). He is currently course leader for the BA (Hons) Animation Production course at the Arts University Bournemouth in the UK.

The Transformation of Space in The Second Coming

This paper seeks to investigate the transformation of space in Joan C. Gratz’s adaptation of W.B. Yeats’ poem The Second Coming. It thereby hopes to gain insight into Yeats’ use of literary space, and how he deploys moments of realist representation to ground the abstract concepts of his poems in human experience. Aylish Wood uses the term ‘reverberation’ to describe a process where space is no longer a stable stage for character action in a conventional cinematic context, but can be an unstable entity that ‘re-forms’ in experimental animated films. Gratz uses the pliable properties of clay to embrace the dynamism of space inherent in Yeats’ text. Her use of motion reflects the movement of Yeats’ cosmological model; the spiraling gyres of historic determinism that lead to moments of organized chaos. Chaos is an integral part of Gratz’ work, where we can see suspended in a dialectic between transition and resolution the possibilities of what an image may become. It questions the dichotomy of inside and outside, identified by Bachelard as a reductive geometry that impinges on the possibilities of metaphysics. By reading The Second Coming as both poem and animated film, we can identify the ambiguous space of history as being both inside and outside, and being both personal and social, pushing a prescriptive sense of space outside ourselves to allow a freer consideration of being, which is liberated from geometric rules. 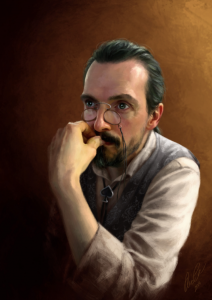