Pierre Floquet
Pierre FLOQUET teaches English, and is associate professor at INP, Bordeaux University. He wrote on linguistics applied to cinema, focusing on Tex Avery cartoons. He has widened his interests beyond animation to live-action cinema, participating in national and international books and journals. He edited CinémAnimationS (2007), and published Le Langage comique de Tex Avery in 2009 (recipient of 2011 McLaren-Lambart award for the Best Scholarly Book on animation). His recent works and articles deal with film aesthetics and representation, movement in animation film, the interactions between virtual effects and live-actor performance.

This paper considers what happens, when European directors of today stand beyond any commercial requirement, and freely develop their artistic creativities and interpretations of both the original historical and iconographic bedrocks, and the collective memory turned reference.
But for one, built on humour and cynicism, these films as a whole rely on empathy, and thus share a common discourse of accusation. And yet, they display a wide range of various animation techniques. Each of them justifies, claims and extends (via their nature and materiality) the animators’ aesthetic choices and discourses, from 2D drawings to digital and 3D effects, from cut-outs to cloth, plasticine, paper and more. The selected techniques rather than mere tools for artistic expression, become a vivid medium to represent one reality erupting from a projection of the mind, evolving from time-gap and temporality. They tightly interconnect form and meaning (‘signifiant’ and ‘signifié’). More than a “mise en forme” of both a face-to-face with, and a questioning of alterity and death, the animated material calls for physical sensations, suggests smells and stench. As it is, such an aestheticism of madness, mud and rot, does pair with a forceful – if not realistic – and yet distanced representation of trench warfare and trauma.
Reference to Bakhtin, Bergson, Deleuze, Foessel …
main films discussed: Lettres de femmes, Le jour de gloire, The Uncanny Valley (not exhaustive). 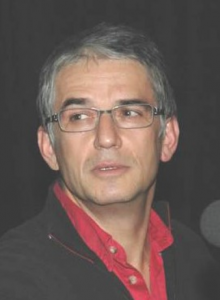