Miguel Pires De Matos
Miguel Pires de Matos was born on May 24, 1966 in Lisbon, Portugal. With an academic background in Architecture and Music, he has been directing experimental animation films since 2010 and has also been working on programming and production of film festivals. He coordinated and co-directed 3 experimental animation shorts premiered at the opening ceremonies of Monstra Festival in Lisbon between 2010 and 2014. He has collaborated with the programming team of this festival since 2012 and is currently working in its direction with the artistic director Fernando Galrito. “4 States of Matter” is his first professional film, produced by Praça Filmes and made with the support of the Portuguese Institute of Cinema. He is currently doing a doctorate at the University of Lisbon with the theme “animation and abstraction”. He has been a member of the Gregorian Choir of Lisbon since its foundation in 1989, with which he recorded 4 CD’s internationally edited by DECCA.

“4 States of Matter” is an abstract animation film whose main theme is “matter”. It is developed in four different acts/movements, each one with a distinct graphic and sound universe, globally constituting a journey through the four major states of matter: solid, liquid, gas and plasma. In each of these parts three conceptual dimensions coexist, corresponding to three different areas of human knowledge: science, art and religion. These three sub-themes are the sources of inspiration for abstract shapes and sounds as well as movements and rhythms that form the animated sequences of the film.
The aim of this presentation is to unfold some of the creative process of the film, explaining the strategies and artistic operations that led to the creation of the final abstract images, sounds and movements. This is a film about inorganic matter that involved the rejection of all anthropomorphic movement. Thus, the achievement of abstraction did not come directly from inner emotional moods or impulses, but was the result of creative rational though in every aspect of the film, establishing an intricate set of structural relationships between the parts and the hole. In spite of the complex script, the intention was not to obtain a heavy visual and sound ambience for the spectator, but instead, to work with very simple constituents, justified by deeper levels of though. The film has also implicit a reflection on the term abstraction and different philosophical notions of reality. 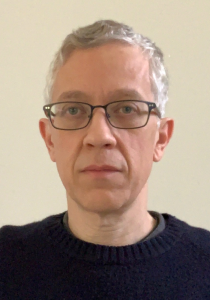