A CRITICAL REFLECTION ON COOPERATIVE ANIMATION IN MIXED REALITY SPACES

Juergen Hagler
Dr. Jürgen Hagler is an academic researcher and curator working at the interface of animation, game and media art. He studied art education, experimental visual design and cultural studies at the University for Art and Design in Linz, Austria. Currently, he is a Professor for Computer Animation and Media Studies in the Digital Media department at the Hagenberg Campus of the University of Applied Sciences Upper Austria. He became the programme coordinator for the Digital Arts master’s degree programme in 2009. Since 2014 he is the co-head of the research group Playful Interactive Environments with a focus on the investigation of new and natural playful forms of interaction and the use of playful mechanisms to encourage specific behavioral patterns. He has been involved in the activities of Ars Electronica since 1997 in a series of different functions. Since 2017 he is the director of the Ars Electronica Animation Festival and initiator and organizer of the symposium Expanded Animation.

As Mixed Reality (MR) technologies become more prevalent in recent years, they are again being increasingly utilized in art installations in order to offer participants a more immersive spatial experience. Such installations typically focus on the experience of individual users. Nevertheless, shared co-located experiences with multiple users are becoming more common. Furthermore, these installations go far beyond a representation of 360° videos. Participants become to actors, there movements or actions become an animation input. The animated world evolves through the interaction, collaboration und communication between the users. Making participants aware of each other and facilitating interaction between them in such environments can be quite challenging, particularly considering the technical limitations of current technology. Using the participants actions, positions and motion as an input to create a collaborative MR world offers various challenges. Initial artistic approaches and interaction concepts to expanded forms of animation can be identified in the context of Expanded Animation, Interactive Art, and Hyperanimation.On the basis of recent MR installations in art museums and VR exhibitions at animation festivals, various artistic approaches and animation strategies derived from the participants’ action and physical movements will be discussed. The primary consideration will be a critical reflection of artworks focusing on technologically-mediated social interactions. 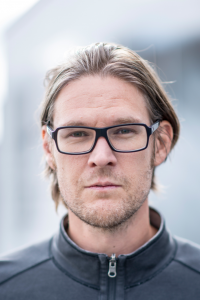