ANIMATION AND SOCIAL HOUSING, AN EXPERIMENT INSIDE SIX HOUSING TOWERS IN LISBON, 1959

This paper focuses on a case of ‘integration of the arts’ carried out in the interior of six housing towers, in Olivais Norte, Lisbon, which had the peculiarity of approaching animation as a spatial construction.
This unprecedented experiment consisted of a set of sculptural concrete reliefs in the atriums of each floor, in front of the lift. At the time, the doors of the lifts were transparent, which allowed the dwellers a sequential reading of the reliefs when they went up or down. The objective would be to create an ‘animation effect’, generated by the displacement of the dwellers inside the lift.
The ‘integration of the arts’ was very common in the practice of one of the project’s architects, Nuno Teotónio Pereira. Adept of the so-called organic architecture, he had as a concern the aesthetic qualities of the common spaces of the buildings, where the inclusion of works of art played an important role.
In this case, six artists were invited (one for each nine-story tower) to create sculptural reliefs considering their sequential viewing from the lift. The invited artists – António Paiva, Querubim Lapa, Jorge Vieira, António Charrua, Vasco Conceição and António Alfredo – worked on this project during the construction of the towers, in the mid-1960s. Not all of them explored in full potential the reading of the reliefs from the lift, but we can consider at least the work of one of them – António Paiva – in which this simple ‘animation effect’ was sought and achieved.

Palavras-chave: integration of the arts, animation as a spatial construction, social housing 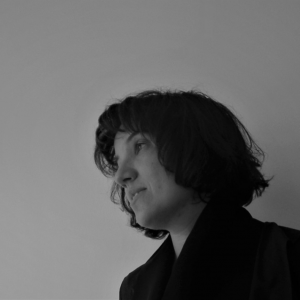