Debjani Mukherjee Mukherjee
Debjani Mukherjee is a research scholar at the IDC School of Design at Indian Institute of Technology, Bombay, India. She has a Masters in Animation Film Design from National Institute of Technology, Ahmedabad. Her research interests include animation, documentary, collaborative filmmaking and indigenous art pedagogy. She is currently working on an animated documentary using ‘collaborative perspective’ as a process.

It is time we addressed the elephant in the room. According to Woman’s League of Burma and AJAR Briefing Report of 2016, between 2010 and 2015, 92 women reported conflict-related sexual violence in Myanmar. However, only 2 cases were tried in civilian courts. Rape has been and continues to be used as an outlet of anger, a war weapon, an instrument of repression and a ‘correctional’ act of subjugation, across all social levels. When Yangon Film School in Myanmar sent me audiotapes of documentary recordings of violence, injustice and humiliation of the victims, or let me say survivors, presently at the internally displaced camps of Myanmar, it was with this background that I took it up, the intention of addressing the theme of atrocities towards women. The challenge was that these true stories had to be portrayed maintaining the anonymity of contributors and yet expected to speak of the injustice and violence under the present rule. However, what made the project stand out for me was that the films had to be made through a community engagement workshop by the youths of Myanmar, making it a powerful tool of social engagement and protest. In this paper, I share my reasons to choose animated documentary as a social engagement tool. What are its advantages, challenges, ethics and how is the audience response? I also discuss concerns of legitimizing docu-animation as a documentary medium through my practice, specifically taking the example of this project. 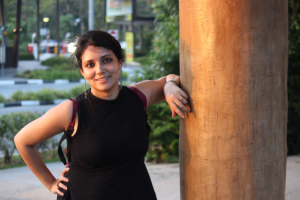