Laos, the tiny landlocked country in Southeast Asia is a quiet, mountainous, and agricultural country with 8 million people and 90 spoken languages. A former French colony, it is the most bombed country ever, with 800 million landmines dropped during the Vietnam War and has an extremist communist government similar to North Korea. With no Starbucks or McDonalds, and only 3 active movie theaters in the entire country, this country has almost no footprint in animation production. However, through animation workshops and higher institutions, Lao animation is building up. Helene Ouvrard produces the Vientianale International Film Festival and promotes short and feature animation and hosts visiting artists such as Peter Chanthanakone and Nikki Schuster for animation workshops. Inspiring artists in the field such as Souliya Phoumivong is using stop motion animation to create a Lao children’s TV show under UNICEF. Inspired by the likes of Hayao Miyazaki, Souliya takes simple characters through living quiet and peaceful lives in rural Laos. Abel Soukthavone Panyaphone uses CG animation to create wild and outrageous Hollywood style effects in his award winning short films and “MCG StriveFree” and his young team have dreams to produce the first Lao 3D animated film with slick, game style animation. This presentation explores the last 20 years in the advancement of animation production in Laos and their role in the discussion of international animation. 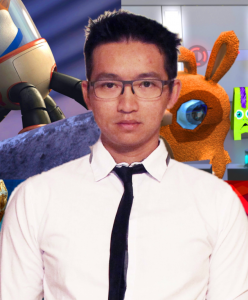