HOW VISUALS BRING US TOGETHER WHEN LANGUAGE SEPARATES US

Naima Alam
Ms. Naima Alam is a research assistant for the Center for Media Competence at Tuebingen University, Germany. She is currently pursuing her PhD on Visual Aesthetics of Women’s Rights Animations by NGOs.

The Global South comprises of colourful and culturally diverse regions. For example in India there are 122 languages spoken in the 29 states. In this paper I undertake a multimodal analysis of Meena, an animated series made in the 1990s, by UNICEF. The animation was conceptualized in Prague by Neill McKee (communications specialist in Bangladesh), drawn by artists in four South Asian countries (Bangladesh, India, Nepal, and Pakistan), and animated in India and Hanna-Barbera’s subsidiary studio in the Philippines. Outsourcing projects to Asia is common practice in the global animation industry. However, this one was actually a collaboration to create awareness on women’s rights issues. The animation was initially dubbed in four languages but now Meena speaks 30 languages including Arabic, Burmese, French, and Chinese.
My analysis demonstrates that the language is the only thing that separates the audience, whereas as the girl and her village, produced with the help of 2500 respondents in four countries, brings them together. I present a comparison between the vocal tonalities of the same characters speaking different languages. Furthermore, the analysis of the animated visuals show cultural similarities in South Asian drawing styles, village scenes, and character design. Finally, I establish that despite South Asians believing that we are different because we speak different languages and believe in different religions, we are quite similar in our behaviour and practices. 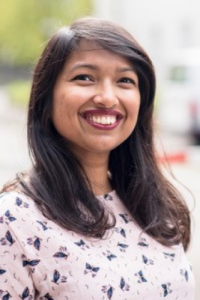