Kaho is also a veteran technical director of the feature animation industry, with contributions to various Academy Award nominated animated films, including Shrek 2, Madagascar, Robots and the Ice Age series.

He is currently a faculty member of the School of Creative Media, City University of Hong Kong.

In recent years, Cinematic Virtual Reality (CVR) has emerged as a particular form of narrative based VR. Unlike real time rendered VR, CVR only allows limited movements for the viewer, but it affords finer and visually more complex rendering of the virtual environments. While a new grammar for this medium is still evolving, one obvious challenge is in guiding the viewer to look where the filmmaker intended. Conventional cinematic techniques such as sound and visual cues have been adopted to direct the viewer’s attention. However, this dispersed viewer’s attention might suggest an unexplored territory for storytelling in VR.

My current practice-led research explores how dispersed viewer’s attention could be used to navigate branching narratives through producing a creative work. The Library is an animated VR experience that reimagines Jorge Luis Borges’ Library of Babel. The viewer is not directed to any particular region in a scene, but the story progresses according to how the viewer’s gaze reacts to the narrative events that are organised both temporally and spatially, all the while without the viewer being aware of the gaze interaction mechanism. This paper presents some of the strategies that have emerged in the production of the creative work, which could lead to further explorations of a non-intrusive gaze directed interactive immersive cinema. 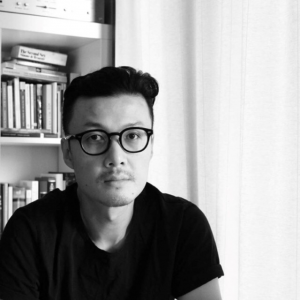