ZUM GEMEINWOHL! (FOR THE COMMON GOOD!): ANIMATION EXPRESSING THE LOCAL IN THE GLOBAL

Samantha Moore
Sam Moore is an animated documentary maker who is passionate about the ability of animation to convey insights into tricky documentary topics. She has made work about competitive sweet pea growing, phantom limb syndrome, twins and multiple births, audio-visual synaesthesia, micro-biology, archaeological finds, and now the manufacturing of knickers.

Sam’s films have won awards all over the world and she has a Ph.D. (2015) about the way animation can be used to document perceptual brain states, such as phantom limb syndrome and face blindness. Her artistic methodology is based on establishing strong symbiotic working collaborations with the people who are represented in her films.
Samantha is a senior lecturer at Manchester Met University, a senior fellow of the Higher Education Academy and she writes about animated documentary (most recently a chapter in Drawn From Life, EUP, 2019). She guest lectures regularly both on the UK and abroad

This paper begins as a case study of the author’s contribution to an anthology feature film, combining the perspectives of 10 female European animation directors. From Stockholm to Shrewsbury, London to Vienna, the project takes a snapshot of pan-European animation at a time of fracture with a message of co-operation.
Bloomers, the author’s contribution to this project, starts with the local and ends with the global. It takes a lively view of the sewing room environment at Headen and Quarmby, a family run Manchester based knicker factory, which employs local long term unemployed people. Made using a combination of audio interviews, an original score by Swedish composer Malin Bång incorporating sounds of the sewing room, and animation based on observational drawings that is then printed onto fabric, it shares a glimpse into the working lives of British factory workers. As a whole the project gives a patchwork perspective on a global economic alternative to market driven capitalism.
Choosing animation, a naturally subversive form (Wells, 1998) to provide a perspective on alternative economic models to the broken present is an unusually bold move. The author draws together the threads that connect these ten films and puts them in a broader context of animation history. 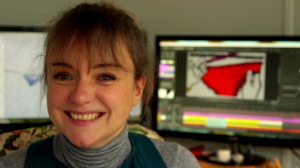